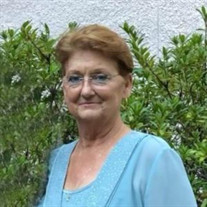 Wilma Jean Sizemore, age 73 passed away Thursday, November 18, 2021 at her residence in London, Ky. She was the widow of Jack D. Sizemore. She was born to Herman and Dorothy (Wood) Cochran in Casey County, Kentucky on January 28, 1948 but moved to Cincinnati as a child where she grew up. There she married John Cromer and this union resulted in two daughters, Tonya Renee Peters (Randy) and Madgel Miller Fisher (Kenneth), and 4 grandchildren (Tyler Vaughn, Jacob Miller, Alexandria Hacker, Bradley Vaughn) all of London, Kentucky. In 1987, she married the love of her life, Jack Sizemore and this union gave her 5 more children: Ronnie Sizemore, Tony Sizemore, Daryl Sizemore (Kathy), Robbie Sizemore, and Debbie Burnham (Alan), and 8 grandchildren (Gretchen, Hilary, Ethan, Dalton and Tia Sizemore, Kylee and Katrina Hart, Brennan Jump, Kyle and Kristan Schmalz) all of Madison, Indiana. She was also blessed with a multitude of great grandchildren and was affectionately known by everyone as “Mamaw Wilma”. She was preceded in death by her parents, one sister (Kelma Cochran Slusher), and one brother (Herman Douglas Cochran). She is survived by 2 sisters, Carol Cromer (Dean) which is her twin, and Pam Kirby as well as many nieces, nephews, and good friends that she loved unconditionally. Funeral services for Wilma Jean Sizemore will be held on Sunday, November 21, 2021 at 2:30 p.m. in the chapel of House-Rawlings Funeral Home with Roy Hamblin officiating. Burial will follow at Owsley Cemetery in London, Kentucky. The family will receive friends on Sunday, November 21, 2021 beginning at 12:30 p.m. until the funeral hour also at the funeral home. Pallbearers will be Tyler Vaughn, Cayden Hacker, Bradley Vaughn, Jaylin Peters, Jacob Miller, Eric Cromer, Darren Cromer and Tristan Bowman. The family has entrusted House-Rawlings Funeral Home with the arrangements.

Wilma Jean Sizemore, age 73 passed away Thursday, November 18, 2021 at her residence in London, Ky. She was the widow of Jack D. Sizemore. She was born to Herman and Dorothy (Wood) Cochran in Casey County, Kentucky on January 28, 1948 but... View Obituary & Service Information

The family of Wilma Jean Sizemore created this Life Tributes page to make it easy to share your memories.

Send flowers to the Sizemore family.