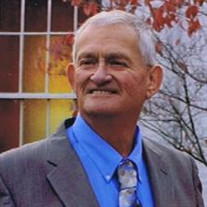 Virgil Dale Brown, born January 18, 1950, was a man who had an expansive love for his family, friends, country and God. His sense of humor was boisterous and his wit lively. Many stories about his great talent for brightening up his environment live in family and railroad history. But we could not keep him as God called him home on his Daddy's birthday of April 16th, adding some brightness in heaven. Dale was preceded in death by his parents, Oscar and Thresa Brown; and, his sister, Jenell Brown Davis whom he grew up with on Watts Avenue in London. There he developed a dedicated work ethic, mowing yards at ten years old to buy his school clothes. He followed that in adult life with a 32-year career as a locomotive engineer. Listed are family who survive him and mourn his absence on earth while celebrating his presence in heaven: Wife Susan Tidwell Brown; ex-wife and mother of children, Judy Elliott Brown. Children and stepchildren and their spouses: Mary Elizabeth (Beth) and John Overton of Lexington; Tami Jo Brown and Marsha Smallwood of Erlanger; Heather and Matthew Massengill of LaFollette, TN; Candace and Matthew Norton of Williamsburg, KY. Grandchildren: Kelsi Dale Rains, Nathan and Preston Massengill; Parker Swafford, Ellie and Boone Norton. Great-grandchildren: Cameron, Caiden, Bella and Christian Rains. Special family, Keith and Donna Rains. Lifelong friend, Garry Hill. Additionally, a multitude of friends and family celebrate the life of this man with a vibrant personality. Dale enjoyed traveling, especially a trip to our western states with friends BJ Clair and Jerry Whicker where they camped and collected gemstones. Cruising to Alaska and seeing magnificent Denali with Susan, the love of his life, was also a treasured trip. He enjoyed life's simple pleasures, drinking coffee on the upstairs porch while admiring Pine Mountain and watching grandchildren blow bubbles. A favorite saying of Dale's was, “Move on!” when life dealt trials and tribulations. With God's help, he made a peaceful transition last Tuesday, moving on to his true home where many souls received him. A faithful member of Jellico United Methodist Church, he expressed that the following be thanked for their dedication to his care: Fresenius Dialysis Clinic in LaFollette, TN; the staff at Beech Tree Manor in Jellico, TN; University of Tennessee Medical Center; South Whitley Volunteer Fire Department; all others who helped him in his time of need. Funeral services for Virgil Dale Brown will be held on Saturday, April 20, 2019 at 2:00 p.m. in the chapel of House-Rawlings Funeral Home with Rev. Calvin Hays and Rev. Johnny Walker officiating. Burial will follow at Campground Cemetery in London, KY. The family will receive friends on Saturday, April 20, 2019 beginning at 12:00 p.m. until the funeral hour, also at the funeral home. The family has entrusted House-Rawlings Funeral Home with the arrangements.

Virgil Dale Brown, born January 18, 1950, was a man who had an expansive love for his family, friends, country and God. His sense of humor was boisterous and his wit lively. Many stories about his great talent for brightening up his environment... View Obituary & Service Information

The family of Virgil Dale Brown created this Life Tributes page to make it easy to share your memories.

Send flowers to the Brown family.