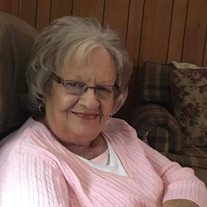 Trula Jean Bruner, age 78, of London, Kentucky, passed away Saturday, October 23, 2021 at Baptist Health Hospital in Lexington, Kentucky. Trula was born February 10, 1943 to the late George William and Hazel Irene Smith of Livingston, Kentucky. She leaves behind her loving children, Debbie Smith and husband Mike, Mildred McCoy and husband Tom, Ronnie Lane Bruner and wife, Jackie, Craig Bruner, all of London, KY; Ronnie Bruner of London, KY; her three grandchildren whom she adored, Michelle Smith of Columbus, OH, John Bruner of London, KY, Jack Bruner of London, KY. She is also survived by one sister, Barbara Burdine and two brothers, Larry Smith and Jeffery Smith. In addition to her parents, she was preceded in death by one daughter, Brenda Sue Gabbard; two brothers, Sonny Smith and Gary Smith; and the father of her daughters, Millard Gabbard. Trula loved her family and everyone she met. She enjoyed cooking and spending time with her children and grandchildren. She was a member of the Lebanon Baptist Church. Trula will be sadly missed by all who had the privilege to get to know her. She leaves behind a host of family and friends who will miss her. Funeral services for Trula Jean Bruner will be held on Wednesday, October 27, 2021 at 1:00 p.m. in the chapel of House-Rawlings Funeral Home with Steve Smith and William Man Cobb officiating. Burial will follow at A. R. Dyche Memorial Park in London, Kentucky. Pallbearers will be Tom McCoy, Mike Smith, John Bruner, Jack Bruner, Kevin Hacker and David Gross. The family will receive friends on Wednesday, October 27, 2021 beginning at 11:00 a.m. until the funeral hour also at the funeral home. The family has entrusted House-Rawlings Funeral Home with the arrangements.

The family of Trula Jean Bruner created this Life Tributes page to make it easy to share your memories.

Send flowers to the Bruner family.