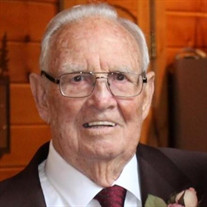 Troy Gene Smith, age 94 of London, KY passed away on Thursday, April 21st, 2022. Troy was preceded in death by his parents Tipp & Maggie Smith, his first wife Lorna Jean Smith, and his second wife of 33 years Norma Jean, who passed away in 1999. He shared a special bond with his siblings who are in heaven; Kenneth & Martha Smith of London, KY, Cleo & Jim Gilbert of Merrillville, Indiana and Ed Sweet of Swiss Colony Kentucky. He was also blessed to have a baby sister whom he remained close with until his passing, Annette Sweet who resides in Swiss Colony, KY. Troy was the proud father of two sons, Larry Smith of Garden City, Michigan and Brad Smith (Vickie) of London, KY and a daughter, Lynette Keyes (Bob) of Garden City, MI. He was also blessed with four grandsons, David Smith (Maria) of Arvada, Colorado, Michael Smith of Sterling Heights, MI, Joseph & Scott Smith of London, KY and one granddaughter, Kaylin Thomson (Bradley) of Trenton, MI. He was also a proud cousin/honorary grandparent to Tracy Vincent (Trent) of Lexington. Family meant everything to Troy and he was thankful to have a bonus great-grandson through David’s marriage to Maria. Through Brad’s marriage to Vickie, Troy also gained 4 bonus grandchildren and 5 bonus great-grandchildren who enjoyed their regular visits with him. Troy Gene grew up in London, KY and joined the Army when he was 17 to serve his country in WW2. Through his job as a military photographer, he found a passion for taking photos and he used this skill to document all of his adventures throughout his life. After his army years he worked briefly in the steel mills in Indiana and through his job he often traveled to Michigan which is where he eventually settled down with his wife Lorna Jean Cobb. He built a home in Garden City, MI and raised his two oldest children Larry & Lynette. When Lorna passed away, he remarried Norma Jean and they had a son, Brad. They remained on Lathers Street in Garden City, surrounded by beloved neighbors and friends who became a second family to him, especially his next-door neighbors Susie & Harold Turner, who he referred to as “the best friends of his life”. He loved to travel and he ventured across the United States with his immediate and extended family for many years. Until the day he passed, he could vividly recount his adventures with exact detail and you could picture yourself there. A hard-worker who prided himself in his job, Troy established a career with Cadillac Motors and retired after 36 years. After he retired in 1983, Troy ventured with Norma & Brad back to London, KY where he built his dream home; a gorgeous log cabin assembled by hand. The log cabin was more than a home; it was a gathering place, a safe haven and a vacation destination for countless friends and family. In his later years, Troy enjoyed the companionship of Barbara Harmon and together they made many happy memories. Brad, Vickie & Scott moved into the log cabin to help care for Troy, and together they enjoyed hours of family time watching the animals on the “farm” and basking in the sunlight on the old front porch. To know Troy was to love him. You’d be hard-pressed to find someone who could speak a single negative word about him. He was a family man who provided support and endless love to all of his children and he led them with kindness no matter the situation. He was the perfect grandfather, unwavering in his love and showing pride in all his family's accomplishments. He was the true definition of a friend, always willing to lend a hand or ear, and to list all of the friends he made throughout his lifetime would be impossible. He was the backbone of his family and his absence creates a void that can never be filled. He will be missed immensely by all who had the pleasure of being a part of his long and fulfilled life. Funeral services for Troy Gene Smith will be held on Sunday, April 24, 2022 at 2:00 p.m. in the chapel of House-Rawlings Funeral Home with Jeff Langford officiating. Burial will follow at Reuben-Bruner Cemetery in London, Kentucky. The family will receive friends on Sunday, April 24, 2022 beginning at 11:00 a.m. until the funeral hour also at the funeral home. A live-stream of the service will be available at Click here to view Livestream of Funeral Service The family has entrusted House-Rawlings Funeral Home with the arrangements.

Troy Gene Smith, age 94 of London, KY passed away on Thursday, April 21st, 2022. Troy was preceded in death by his parents Tipp & Maggie Smith, his first wife Lorna Jean Smith, and his second wife of 33 years Norma Jean, who passed away in 1999.... View Obituary & Service Information