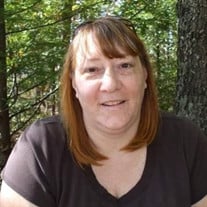 Tracie R. Hall, 54, of Whitesburg, Kentucky passed away Friday, April 19, 2019 at St. Joseph Hospital in London, Kentucky. She leaves behind her loving husband, Rodney Hall of Whitesburg, KY; her mother, Ellen Thomas Sanger; three children, Zebulun Daniel Hall of London, Ezekiel Joseph Hall and wife Stephanie of East Bernstadt, Emily Joy Eileen Prince of London; ten siblings, Teddy, Joy, Jodi, Shelly, Kelly, Danny, Larry Lee, Holly, Kris, Rick; six grandchildren, Eli, Noah, Easton, Lexi, Gabriel, Keaton; plus a host of family and friends to mourn her passing. She was preceded in death by her father, Danny Rogers; her brother, Charles Peter Johnson. Tracie was a veteran of the United States Air Force. She was a devoted grandmother and loved being surrounded by her family. She was the most amazing sister. A Memorial Service for Tracie R. Hall will be held on Tuesday, April 23, 2019 between the hours of 5:00 p.m. and 9:00 p.m. in the chapel of House-Rawlings Funeral Home with Joe Banks officiating. The family will receive friends during that time. The family has entrusted House-Rawlings Funeral Home with the arrangements.

The family of Tracie R. Hall created this Life Tributes page to make it easy to share your memories.

Send flowers to the Hall family.