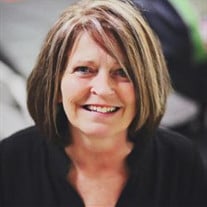 Sue Wagoner, age 57 of London, KY, passed away on Wednesday, August 9 at U.K. Medical Center in Lexington, KY. She leaves behind her mother, Barbara Ann Harmon of London, KY; one daughter, Stacie Allen of London, KY; two sons, Nathan and Austin Wagoner both of London, KY; five siblings, Christine Shoun of London, KY, Debra Ward and Galen of Michigan, Bernice Saylor and husband Orvile of London, KY, Daniel Ward of London KY, Randy Ward of London, KY; and five grandchildren, Macen, Madisyn, Briar Rose, Brycen, and Paisley, plus a host of other family and friends to mourn her passing. She was preceded in death by her husband, Randy Wagoner; her father, Chester Ward and one brother, Dave Parks. She was a homemaker and a retired data entry clerk and was a member of Philpot Chapel Church. She was loved and will be greatly missed by all her family and friends. Funeral services for Sue Wagoner will be conducted Sunday, August 13 at 2:00p.m. in the chapel of House-Rawlings Funeral Home with James Allen officiating. Entombment will follow in the Cumberland Memorial Cemetery. The family will receive friends after 6:00p.m. on Saturday, August 12, also at the funeral home. In lieu of flowers the family respectfully requests donations be made to the funeral home to assist with funeral expenses.

The family of Sue Wagoner created this Life Tributes page to make it easy to share your memories.

Send flowers to the Wagoner family.