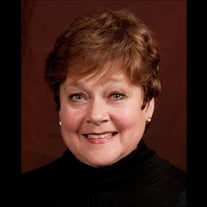 Stevie Rawlings, age 74, of Bradenton, Florida passed away on Monday, July 19, 2021. Originally from Indianapolis, IN, Stevie was a graduate of Arlington High School, and Indiana University (IU), where she earned a bachelor’s degree in English. At IU, Stevie was a member of the Pi Beta Phi Sorority and an active member of the Indiana University Singing Hoosiers. With the Singing Hoosiers, under the direction of Bob Stoll, Stevie participated in USO shows as well as European and national tours. Later in life, in 2004, Stevie earned a master's degree in Music Education from Columbia University, while teaching high school full-time. Labeled as a “triple-threat” performer, Stevie's professional acting credits on stage were numerous. Her favorite musical theater roles included Charity - Sweet Charity (three productions); Ilona - She Loves Me; Bianca - Kiss Me Kate; Winifred - Once Upon a Mattress; Minnie Faye - Hello Dolly; Emily, Celia, Dorothy and Ma - Twigs; Sonia - Godspell; First Woman - Jacques Brel; Agnes - I Do, I Do; Jill - Butterflies are Free; Maria - The Sound of Music; Kim - Showboat; and many more. Stevie reprised these roles at various regional theaters in the Midwestern and Eastern U.S., including Wagon Wheel Playhouse in Warsaw, Indiana. Stevie leveraged these experiences to go on to direct and choreograph musicals, operas, and shows at the professional, collegiate, high school, middle, and elementary school levels. Among Stevie's many credits, she served as Lecturer in Opera and Musical Theater at the University of Cincinnati College Conservatory of Music (CCM), was instructor in dramatic movement at the Academy of Vocal Arts in Philadelphia, and was invited as guest artist to over 40 major universities as well as for International Schools in Hamburg, Germany. She was special choreographer for the Fred Waring Show for its last six national tours, was staff writer and director for Kings Productions (later Paramount Parks) for seven seasons, was a regular clinician at numerous summer show choir camps, while also writing and directing shows for Department of Defense USO tours and cruise ship entertainment. She created and for several years performed a one woman show, "Hats Off To Women," nationwide, and she was a proud recipient of the Singing Hoosiers Distinguished Alumni Award. Stevie starred in so many roles during her remarkable life, including that of wife, mom, grandma, teacher, co-star, colleague, and friend. She brought to each of those roles a foundation of passion for music and performance, forged at a young age from dedicated training in dance, singing, and piano. In the 20 years before her retirement, Stevie found a new professional home base at Paramus High School in New Jersey, where she served as the Director of Choral Activities, directing multiple choirs, directing and choreographing the annual musicals, and teaching music theory. While she was proud of the musicals she directed there each year, it was the day-to-day interaction with students that energized her and refocused her creative talents. Stevie was excited by the follow-through with students that working with them every day allowed her. As an arts educator and full-time teacher, she could help students realize new potential, new goals, and new self-worth through performance. Stevie knew she was funny, and she enjoyed putting people in stitches and liked it when people acknowledged her canny comedic timing and wit. She was an avid reader and skilled writer, showcased in her book of poetry, Baby’s Breath, which was published in 2014. If you praised her prose, that would please her to no end. She was also a loyal and dedicated friend. Stevie spent the last 32 years of her life married to a man who was more than a soulmate; as a performer himself, Kevin appreciated and marveled at the magic that was Stevie's creative genius, and together they helped channel the best of each other into their art and lives. To know Stevie was to love her, as her spunk was infectious, and her creative talents were boundless. Her legacy is one of deep and wide inspiration not just to her husband, children, and fellow stage performers, but to countless others needing a spark to help find joy, humor, and humanity in their lives. Stevie's light may have gone out in this world, but her electric spark lives on in all whose lives she touched. She leaves behind her loving husband, Kevin Ray Rawlings; three children, Dominic Rivers & wife Liz of Littleton, CO, Dorian Rivers & wife Yvette of Reston, VA, and Morgan Fagioli & husband Christopher of Reston, VA; two siblings, Marcia Dangerfield and Christopher Reider, both of Indianapolis, IN; three grandchildren, Cyrus, August and Ingrid Rivers, plus a host of other family and friends to mourn her passing. She was preceded in death by her parents, John Henry Reider and Alice Moore (nee Brown). A memorial service for Stevie Rawlings will be held on Saturday, August 28, 2021 at 12:00 p.m. at First Christian Church, 303 N. Main St., London, Kentucky with Rev. Canon Dr. George A. Hill officiating. Burial will follow at A.R. Dyche Memorial Park in London, Kentucky. The family will receive friends on Saturday beginning at 10:30 a.m. until the service hour also at the church. Guests are welcome to wear colorful clothing, or even polka-dots, to honor Stevie’s joyful spirit. In lieu of flowers, memorial contributions can be made to the Indiana University Singing Hoosiers Robert E. Stoll Fund endowment at http://go.iu.edu/iustoll. The family has entrusted House-Rawlings Funeral Home with the arrangements.

Stevie Rawlings, age 74, of Bradenton, Florida passed away on Monday, July 19, 2021. Originally from Indianapolis, IN, Stevie was a graduate of Arlington High School, and Indiana University (IU), where she earned a bachelor&#8217;s degree in... View Obituary & Service Information

The family of Stevie Rawlings created this Life Tributes page to make it easy to share your memories.

Stevie Rawlings, age 74, of Bradenton, Florida passed away on...

Send flowers to the Rawlings family.