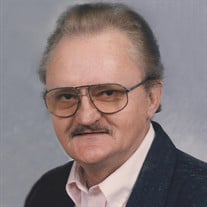 Robert B. Baker, age 85, of London, Kentucky passed away on Wednesday, January 6, 2021. He leaves behind three children, Bobbie Lee Baker of St. Croix Virgin Islands, Reva Baker & Charles Houston of London, KY, Douglas Lee Baker of London, KY; four siblings, Charles Baker, Lorainne Boyer, Dale Baker, Carlos Baker all of Ohio; four grandchildren, Jacob Grove, Gabrielle Reed, Danielle Mooney, Connor Wayne Baker; seven great-grandchildren, Login Buckles, Brennan Wood, Brylee Wood, Skyler Mooney, McKenzie Mooney, Christopher Mooney, Madison Grove, plus, a host of other family and friends to mourn his passing. He was preceded in death by his loving wife, Reva M. Welch Baker, his parents, Henry Lily Baker & Lucy Minnard Baker; one daughter, Teresa Harville, and two siblings, Charles Baker, Joyce Ann Beagley. Robert was of the Christian faith and provided for his family by being a butcher for over twenty-five years. He and his wife were known to foster many children for that period of time as well. He had an interest in classic cars and did wood work projects around the house. A memorial service for Robert B. Baker will be held on Sunday, January 10, 2021 at 2:00 p.m. in the chapel of House-Rawlings Funeral Home with Dylan Reed officiating. The family will receive friends on Sunday, January 10, 2021 beginning at 1:00 p.m. until the service hour also at the funeral home. The family has entrusted House-Rawlings Funeral Home with the arrangements.

The family of Robert B. Baker created this Life Tributes page to make it easy to share your memories.

Robert B. Baker, age 85, of London, Kentucky passed away on Wednesday,...

Send flowers to the Baker family.