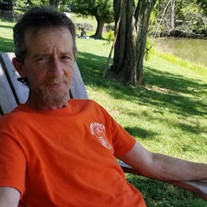 Randy Adams, age 57, of Richmond, Kentucky passed away on Thursday, March 24, 2022. He leaves behind three children, Jeremy Adams & wife Jennifer of Corbin, KY, Amber Adams of London, KY, Jessica Hubbard; eight siblings, Brenda Goldsberry of London, KY, Darlene Sullivan & husband Terry of Lily, KY, Ricky Adams of London, KY, Charlene Turner of Tennessee, Tony Adams & wife Sharon of London, KY, Sandy Adams of London, KY, Ronnie Adams and fiancé Michelle of Jackson County, KY, Tammy Adams of Woodbine, KY; two grandchildren, Evelynn Adams, Rose Adams; his best friend and fur baby, Sophie; his wife, Kawanda Hensley Adams; the mother of Jeremy and Amber, Melinda Brock; plus a host of other family and friends to mourn his passing. He was preceded in death by his parents, Robert Ward Adams & Maxie Marie Truett Adams. Randy loved to travel and especially loved the state of Tennessee. He loved his grandbabies and enjoyed taking them to the zoo. He was a very giving and selfless person that also had a stubborn streak. He had a saying for every situation and will be missed greatly by all who knew him. Funeral services for Randy Adams will be held on Monday, March 28, 2022 at 2:00 p.m. in the chapel of House-Rawlings Funeral Home. The family will receive friends on Monday, March 28, 2022 beginning at 12:00 p.m. until the funeral hour also at the funeral home. The family has entrusted House-Rawlings Funeral Home with the arrangements.

The family of Randy Adams created this Life Tributes page to make it easy to share your memories.

Randy Adams, age 57, of Richmond, Kentucky passed away on Thursday,...