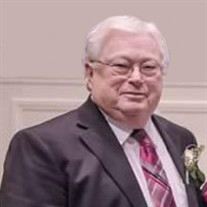 Ralph Roger Cornett, of London, Kentucky passed away December 2, 2019 at 11:11 pm. Born on November 11, 1932, to parents George and Stella Peters Cornett (Laurel County), Ralph was the youngest of 8 siblings who preceded him in death. (Estill Cornett, Ira ”Red” Cornett, Orville Cornett, Orie Cornett, George Cornett, Clyde Cornett and Dorothy Cornett Wittenback.) Ralph married the love of his life, Kizzie Langdon on January 18, 1952. Ralph & Kizzie would live in London, Kentucky for over 50 years and raise three children; Diana Cromer (Terry), Roger Cornett (Tami) & Sherry Skaggs (Brent). Ralph was the Plant Manager for Kern’s Bakery of London and was an integral part of growing the bakery in Lexington, Mount Sterling and London. He retired in 1994. If you asked him, (or even if you didn’t) Ralph would tell you his biggest accomplishment was his family. With a running tally and a number assigned to each, he wasn't shy to brag about his 3 children, 8 grandchildren, and 7 great-grandchildren and all the spouses, and pets that came along with them. He was devoted to his beloved hometown of London where he would be sure to drive his visiting grandchildren slowly through town to marvel at the growth over the years. Never having met a stranger, he was known by many in the community. Ralph and Kizzie were members of First Baptist Church of London. Funeral services for Ralph Roger Cornett will be held on Sunday, December 8, 2019 at 2:00 p.m. in the chapel of House-Rawlings Funeral Home with Terry Lester officiating. Burial will follow at Cumberland Memorial Gardens in Lily. The family will receive friends on Sunday, December 8, 2019 beginning at 12:00 p.m. until the funeral hour also at the funeral home. The family has entrusted House-Rawlings Funeral Home with the arrangements. He was a loyal man, a proud man, but his strength came from his wife Kizzie who was by his side in life and death. She survives him, and in lieu of flowers, the family requests donations be made to the Alzheimer’s Association in Kizzie’s name. https://act.alz.org/site/Donation2?df_id=32112&32112.donation=form1&utm_source=google&utm_medium=paidsearch&utm_campaign=google_giving&set.custom.wt=google_giving&gclid=CjwKCAiAzuPuBRAIEiwAkkmOSAEXQeEqvjV8v9VU5kLp_l0UPUv8J9aPWe_Wac_9Al0FFdp11nlEeRoCcYYQAvD_BwE Alzheimer's Association is a not-for-profit 501(c)(3) organization. Donations are tax-deductible. Our federal tax ID number is 13-3039601. Home Office 225 N. Michigan Ave., Fl. 17, Chicago, IL 60601

Ralph Roger Cornett, of London, Kentucky passed away December 2, 2019 at 11:11 pm. Born on November 11, 1932, to parents George and Stella Peters Cornett (Laurel County), Ralph was the youngest of 8 siblings who preceded him in death. (Estill... View Obituary & Service Information

The family of Ralph Roger Cornett created this Life Tributes page to make it easy to share your memories.

Send flowers to the Cornett family.