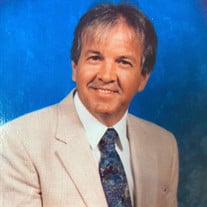 Quentin Lee McWhorter Sr., age 73, of London, Kentucky passed away on Wednesday, May 26, 2021. He leaves behind his loving wife, Brenda Yaden McWhorter; two sons, Quentin Lee McWhorter Jr. & wife Sonya of Lexington, KY, Darren McWhorter & wife Bridgett of London, KY; four grandchildren, Jake McWhorter, Quinn McWhorter, Cole McWhorter and Jude McWhorter, plus a host of other family and friends to mourn his passing. He was preceded in death by his parents, Oliver P. McWhorter and Bonita Combs McWhorter; and two sisters, Brenda Lou McWhorter Martin and Norma Sue Philpot. Quentin McWhorter spent twenty years in community service as a developer, supporter, and proponent of the London Little League, Inc. at Greer Field. From 1975-1982, he coached while also serving one year as Vice-President of the organization. Not only was Quentin successful as a coach, his players were successful, too. As a coach, he helped to develop local athletic talent, with many of the players he coached continuing their athletic careers at the collegiate level. During his Little League involvement, the thirteen-year-old boys won the state tournament, the Little League team was state runner-up, and the girls’ team was state runner up, and the London Little League’s successes just continued to grow year after year. From 1983-89, Quentin served as President of the London Little League. During Quentin’s tenure as President of the Little League Organization, the entire league witnessed expansive growth in the number of youth involved. In 1988 alone, 850 youth played on sixty-six teams on just four fields, two of which had no lights. From 1990-1995, Quentin served as a member of the Little League Board of Directors, continuing to help grow the program until the number of players involved eventually outgrew the facilities at Greer Field. Following his involvement with the London Little League, Quentin and his wife, Brenda, became well known in the Dog Show World, breeding and showing the Saint Bernard breed. Quentin and Brenda formed the nucleus of the Southern Saint Bernard Fancy. They were the welcoming arms for the newbies, and the bridge to the old Saint Fanciers that transition into just attending rather than showing and breeding. They were the best of what showing Saint Bernards can be. Brenda and Quentin were the people that took the time to meet newcomers to the breed, welcome them, mentor them, and teach them about the breed. Quentin not only raised Saint Bernards, he became an expert handler in the show ring, finishing many of his own dogs as Champions. Quentin was a member of the Saint Bernard Club of America since the early 1990's. He and his wife bred, raised, and finished many AKC American Champions, breeding under the Twin Branch prefix. They also produced eight International Champions, Three World Weight Pulling St. Bernards, along with ten Search and Rescue Saint Bernards, two that were in service to the NYC Police Department and one in service to the New Jersey Fire Department. They also produced Four World Weight Pulling Champions, and four St. Bernards that earned the Superdog Award in the K-9 Weight Pulling Competition. They showed a homebred Champion at the prestigious Westminster Kennel Club that earned the First Award of Merit. Quentin retired from CSX Transportation in Corbin, Kentucky after thirty-eight years as the Store Room Clerk Supervisor. Following retirement, Quentin spent his time farming, raising cattle, and supporting his grandsons’ athletic careers. Quentin was a lifetime member of Twin Branch United Methodist Church in London, Kentucky where he served as Treasurer. Funeral services for Quentin Lee McWhorter Sr. will be held on Sunday, May 30, 2021 at 3:00 p.m. at Twin Branch Methodist Church with Donald Tackett officiating. Burial will follow at the Perry McWhorter Family Cemetery in London, Kentucky. The family will receive friends on Sunday, May 30, 2021 beginning at 12:00 p.m. until the funeral hour also at the church. Pallbearers will be Brad Martin, Dayne Cook, Evan Yaden, Tim Buckles, Scott Buckles, Kelly Collier, David Bullard, and Jason Kennedy. Honorary pallbearers are Jimmy McWhorter, Ernie McWhorter, Wayne McWhorter, Gary McWhorter, Lyndon McWhorter, Robert Messer, Robert Rudd, Kenny Brinley, Jim Michael and Medius Woodyard. In lieu of flowers, the family suggests that donations be made to St. Jude Children’s Research Hospital in honor of Quentin Lee McWhorter Sr. at https://www.stjude.org/donate/donate-to-st-jude.html?sc_icid=header-btn-donate-now. The family has entrusted House-Rawlings Funeral Home with the arrangements.

The family of Quentin Lee McWhorter Sr. created this Life Tributes page to make it easy to share your memories.