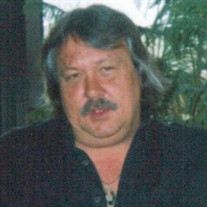 Michael Gregory Chambers, age 60, of Corbin, Kentucky passed away on Friday, October 29, 2021. He leaves behind his loving wife of 21 years, Tonja Young; four children, Lelen Chambers, Latoya Chambers, Kenzie Chambers, Ashlee Davey & husband Terry; three siblings, John Wayne Chambers, Joe Kerr, Pamela Chambers; eight grandchildren, Keira, Colton, Terry, Jessica, William, Raymond, Izabella, Gregory; one great grandson, Christopher; his cat, Highway, plus a host of other family and friends to mourn his passing. He was preceded in death by his parents, Leroy Chambers and Mary Kerr; his son, Michael Chambers; and his brother, Preston Chambers. Michael was a retired mechanic. He attended the House of Prayer. He was a good husband and father. Michael had a very strong personality and could always make you laugh. The family of Michael Gregory Chambers will receive friends on Tuesday, November 2, 2021 from 4:00 p.m. to 6:00 p.m. in the chapel of House-Rawlings Funeral Home. In lieu of flowers, the family respectfully requests that donations be made to the funeral home to help with funeral expenses. Those wishing to donate may do so through the following link. https://www.paypal.com/donate?hosted_button_id=V64FJ4RS74YL8 The family has entrusted House-Rawlings Funeral Home with the arrangements.

The family of Michael Gregory Chambers created this Life Tributes page to make it easy to share your memories.

Send flowers to the Chambers family.