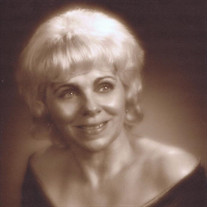 Margaret Yaden Adams, age 95, of London, Kentucky passed away on Friday, October 4, 2019 at Christian Care Communities in Corbin, Kentucky. She leaves behind one granddaughter, Cinnamon “Cindy” Wilson and husband Damon Brad Wilson of London, KY; one great-granddaughter, Savannah Wilson, plus a host of other family and friends to mourn her passing. She was preceded in death by her husband, Fred F. Adams; her parents, Rufus and Ada Jones Yaden; her son, Freddy Adams, Jr; three siblings, Earl N. Yaden, Dorothy McKnight, Rufus Yaden “Upie”. Margaret was retired from State Farm Insurance where she worked in the claim office for 35 years. She was a member of First Christian Church in London where she was a charter member of the Guild. Margaret was also a member of the DAR, Daughters of the American Revolution. Funeral services for Margaret Yaden Adams will be held on Sunday, October 6, 2019 at 4:00 p.m. in the chapel of House-Rawlings Funeral Home with Jonathan Carmack officiating. A private burial will follow at Cumberland Memorial Gardens in Lily, KY. The family will receive friends on Sunday, October 6, 2019 beginning at 3:00 p.m. until the funeral hour, also at the funeral home. In lieu of flowers, the family respectfully requests that donations be made to First Christian Church, 303 N. Main St., London, KY 40741. The family has entrusted House-Rawlings Funeral Home with the arrangements.

The family of Margaret Yaden Adams created this Life Tributes page to make it easy to share your memories.