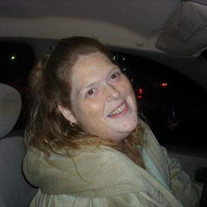 Kimberly Elaine Huff Edgar, age 52, of London, KY passed away on Thursday, February 21, 2019 at Southern Ohio Medical Center in Portsmouth, OH. She leaves behind her husband, Bryan Edgar; her father, Robert Huff; four children, Jennifer Wallace of London, KY, Sarah Napier of Salem, OR, Steven Guthrie of Guntersville, AL, Stephanie Guthrie of Guntersville, AL; two brothers, Chuck Huff & wife Carla of London, KY, Allen Rogers of London, KY; eight grandchildren, Graycie Ogle, Brandon Scott, Carys Wallace, Ma’Ziyah Jackson, Jamar Jackson, Kheelan Jackson, Adrian Guthrie, & Harley Ann Bast, plus a host of other family and friends to mourn her passing. She was preceded in death by her mother, Betty Reams Huff; her best friend, Debbie McCracken. Kimberly was a homemaker and loved to cook. She always made sure everyone else was taken care of. In short, she was a giver. The family of Kimberly Elaine Huff Edgar will receive friends on Sunday, February 24, 2019 between the hours of 5:00 p.m. and 7:00 p.m. in the chapel of House-Rawlings Funeral Home. In lieu of flowers, the family respectfully requests that donations be made to the funeral home to help with funeral expenses. The family has entrusted House-Rawlings Funeral Home with the arrangements.

The family of Kimberly Elaine Huff Edgar created this Life Tributes page to make it easy to share your memories.

Send flowers to the Edgar family.