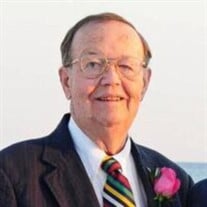 Kenneth Wayne Bullock, born January 4, 1945, passed away June 15, 2020. Kene, as he was known to his family and friends, was born and raised in London, Kentucky. Upon graduating from London High School, he entered college and completed several courses, primarily related to drafting and engineering, prior to joining his father in the farming and construction equipment business. For nearly four decades, Bullock Sales & Service was a fixture in London and the surrounding area. A longtime member of East Pittsburg Baptist Church and First Baptist Church in London, and more recently Forks of Elkhorn Baptist Church near Frankfort, Kentucky, Kene was intricately involved for many years as a Deacon and Sunday School teacher. Naturally mechanically-inclined, his love for the Church was a catalyst for him to lead beautification and facility plant projects for many churches throughout the years. After leaving the equipment business, Kene drew on this background while serving several different churches as a full-time designer and construction manager. Beyond service for the Church and his work, Kene was also actively involved in the community. One of his significant achievements was starting a “Habitat for Humanity” chapter in London. Kene was also an avid competitive shooter. Kene competed for several years in various pistol competitions, but his favorite was trapshooting. Even after physical limitations prompted his retirement from competition, Kene often spoke with and of his trapshooting friends as family. Kene also had a long affinity for woodworking, becoming a master craftsman in fine finish carpentry and maker of high grade pipes from the finest French briar. Kene is survived by his wife of 55 years, Mary McFadden Bullock; son, Ken (Wayne) Bullock and his wife Beth; grandchildren, John Caleb Bullock, age 6; Henry Jackson Bullock, age 4; sister, Judi Leake; brother, Don Bullock; aunt, Pauline Bullock; and a host of friends. He was preceded in death by his father, John Luther Bullock and mother Ruby Turner. A graveside service will be held at 10:00 a.m. on Friday, June 19, 2020 at the Morton Cemetery in Richmond, Texas. In lieu of flowers, the family suggests a contribution be made to a church or religious charity of your choice. This is a courtesy obituary for the family of Kenneth Wayne Bullock.

Kenneth Wayne Bullock, born January 4, 1945, passed away June 15, 2020. Kene, as he was known to his family and friends, was born and raised in London, Kentucky. Upon graduating from London High School, he entered college and completed several... View Obituary & Service Information

The family of Kenneth Wayne Bullock created this Life Tributes page to make it easy to share your memories.

Send flowers to the Bullock family.