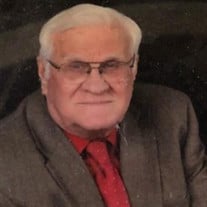 Joseph Robert Krusa, age 92, of London, Kentucky passed away on Saturday, April 3, 2021. He was born on March 16, 1929 in Wadsworth, Illinois. He leaves behind three children, Linda Jo Stowers & husband Dan, Joseph E. Krusa & wife Patti, Vance S. Krusa & wife Sheila; two stepdaughters, Margaret Miller & husband AG, Janice French & fiancé Richard; three grandchildren, Adam Krusa, Brittany Krusa, and Logan Krusa; a step granddaughter, Megan Stowers Gifford; three great grandchildren, Lilly Krusa, Randy Brady and Olivia Brady, plus a host of other family and friends to mourn his passing. He was preceded in death by his wife, Florence Evelyn Wyan Krusa; his parents, Joseph Krusa and Della Delbert Krusa; two sisters, Bernice Disimino and Sophie Chase; and by two brothers, Charles Krusa and Alex Krusa. Joe was a truck driver for many years, as well as self-employed, owning and renting residential properties at various times throughout his life. He was a handyman and was able to maintain and fix just about anything. He was also a proud veteran that served our country in the Korean War. Joe enjoyed many years of RV travel throughout the USA with Florence, the love of his life. He enjoyed camping, canoeing, being in nature and natural surroundings. He had many happy camping experiences also with his first wife Jeanne and his 3 children when they were youngsters, exploring many National Parks. Mountain areas were his favorite. He was a bit adventurous too with motorcycling and even a glider trip when he was 70. He also enjoyed gardening, the Cowboy channel, National Geographic channel & magazines. He was proud of his Lithuanian heritage and kept in close contact with his brothers and sisters while they were alive. He especially enjoyed family Thanksgivings later in life with his children where they all convened annually in North Carolina from 2011-2015. Funeral services for Joseph Robert Krusa will be held on Thursday, April 8, 2021 at 12:00 p.m. in the chapel of House-Rawlings Funeral Home with Pastor Terrell Bradley officiating. Burial will follow at McDaniels Cemetery in London, Kentucky. The family will receive friends on Thursday, April 8, 2021 beginning at 11:00 a.m. until the funeral hour also at the funeral home. In lieu of flowers, donations may be made to VNA Tri-City Hospice, 740 East Laurel Rd., London, KY 40741 or to OPAC Community Services, 426 E. 4th Street, London, KY 40741. The family has entrusted House Rawlings Funeral Home with the arrangements.

The family of Joseph Robert Krusa created this Life Tributes page to make it easy to share your memories.

Send flowers to the Krusa family.