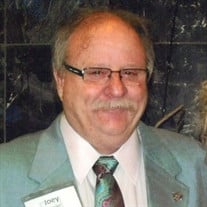 Joseph Butner Kesler III, age 63, of East Bernstadt, Kentucky passed away Saturday, September 26, 2020 at his residence. He was the loving husband of Andrea Kesler for 37 years; the son-in-law of Audrey Reed of East Bernstadt; the father of Joshua Kesler (Destiny) and grandson Tennyson of Prestonsburg, Kentucky. He was the son of Martha Kesler of Bowling Green, Kentucky and the brother of Jonathan Kesler (Wagner) of Kent, Washington. He was the brother-in-law of Sonya Reed of Lexington, Kentucky and Darla Harp (Butch) of Georgetown, Kentucky. He is survived by two special aunts, Mary Louise Jenkins of Brandenburg, Kentucky and Frances Norment of Lumberton, North Carolina. He was preceded in death by his father, Joseph Kesler, Jr., his father-in-law Harmie Reed, and by a very special uncle, Leslie Jenkins, Jr. He was a member of the New Salem Baptist Church. He was certified as an Eagle Scout by the Boy Scouts of America on January 17, 1972. He was commissioned a Kentucky Colonel in 1972. He graduated from EKU with a Bachelor of Arts in Broadcasting. He worked for WKYH/WYMT in Hazard as an anchor from 1983-1986. He established WOBZ-TV9 on November 29, 1993. He also formed “Gospel Sunshine” 98.5 FM Radio. He recently retired and sold his TV station to Wallingford Broadcasting in Richmond and the radio to “The Light of London” WJTE FM. A private celebration of life honoring Joey will take place. There will be no visitation or funeral service due to COVID-19. In lieu of flowers, the family respectfully requests memorial contributions be made to the New Salem Baptist Church Building Fund, 2182 North Laurel Rd., London, Kentucky 40741. The family has entrusted House-Rawlings Funeral Home with the arrangements.

Joseph Butner Kesler III, age 63, of East Bernstadt, Kentucky passed away Saturday, September 26, 2020 at his residence. He was the loving husband of Andrea Kesler for 37 years; the son-in-law of Audrey Reed of East Bernstadt; the father... View Obituary & Service Information

The family of Joseph Butner Kesler III created this Life Tributes page to make it easy to share your memories.