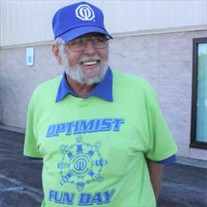 John “Rusty” Rednour, age 73, of London, Kentucky passed away on Monday, January 31, 2022. He leaves behind two children, Jamie Young & husband Brad, Chris Rednour, all of London, Kentucky; two siblings, Joseph Rednour & Michelle of London, KY, Joan Medlock & husband Joe of Lake Placid, FL; one grandchild, J.T. Young; his sister-in-law, Shelia Turner of Emlyn, KY, plus a host of other family and friends to mourn his passing. He was preceded in death by his wife, Pam Rednour; his parents, John and Moriene Jones Rednour; two siblings, Marilyn O’Brien and Helen “Tudy” Davis; and by his brother-in-law, Ralph Turner. Rusty was a truck driver for 20 years. He was a former president of London Little League and a current member of the Laurel-London Optimist Club. He enjoyed going fishing with his friends and loved his grandson dearly. Rusty also served our country in the United States Army. Funeral services for John “Rusty” Rednour will be held on Friday, February 4, 2022 at 1:00 p.m. in the chapel of House-Rawlings Funeral Home with Brad Parrett officiating. Burial will follow at Southard Cemetery in London, Kentucky. The family will receive friends on Thursday, February 3, 2022 beginning at 6:00 p.m. also at the funeral home. In lieu of flowers, the family suggests that donations in be made in Rusty’s memory to the Laurel-London Optimist Club, P. O. Box 906, London, KY 40743. The family has entrusted House-Rawlings Funeral Home with the arrangements. Due to inclement weather and pandemic status, the funeral services will be livestreamed. Click here to view Livestream of Funeral Service

Send flowers to the Rednour family.