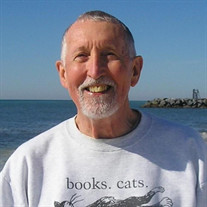 John A. Finley, 82, of East Bernstadt, died May 29, 2020 at his home. His death from prostate cancer was confirmed by his wife of 46 years, Linda Stahl Finley. He was a reporter and feature writer for The Courier-Journal of Louisville for 25 years, then worked as a free-lance writer for a number of years before enrolling at the University of Louisville to earn a MAT degree. When he retired in 2005, he was the website coordinator for the U of L College of Education and Human Development. A native of Red Bud, Illinois, he was born Jan. 5, 1938. His father, L.V. Finley, was a life-long teacher who served in both World War I and World War II, and his mother, the former Bessie Howard, was a homemaker and community activist. She later became the town librarian. While at the Courier-Journal, Finley earned a Louisville Bar Association Gavel Award for legal reporting, the Emery A. Brownell Press Award of the National Legal Aid and Defender Association and the Donald T. Wright Award for Maritime Transportation Journalism. As a free-lance journalist, Finley was co-author of the initial edition of “The Unofficial “Guide to Walt Disney World” and “Kentucky Quilts: 1800-1900.” He was editor of “The Courier-Journal Kentucky Cookbook,” and he also was co-author of “Southern Florida Attractions/A Consumer Guide,” “Central Florida Attractions/A Consumer Guide.” And “Northern Florida Attractions/A Consumer Guide.” He earned a journalism degree at the University of Illinois at Champaign-Urbana, Il. in 1960, and in his first journalism job rose to become city editor of the Champaign-Urbana Courier. It was during that time that he met and married Elise Berhinig. They later divorced but had two children who survive: Michael Finley, Louisville, Ky, and Rebecca Finley, Garner, N.C. Finley was preceded in death by his brother, Howard Finley of Missouri. Other survivors include his sister, Jean Wetzel, Webster Groves, Mo., and two grandchildren, Matthew and Haley McIntosh, who live in San Jose, Calif. Finley and Ms. Stahl bought their home in East Bernstadt in 2006 and moved there to live full-time after she retired in 2009. They have been members of the Friends of the Laurel County Library since then. Finley sang in the Southeast Kentucky Community Chorus until he became ill, and he played in the London Community Band’s patriotic concerts for two years. In lieu of flowers, the family suggests that a contribution can be made in John’s memory to Friends of the Laurel County Public Library, the London Community Orchestra, the Beckham Bird Club of Louisville or an organization working to stem climate change. The family hopes to organize a memorial service later in 2020.

John A. Finley, 82, of East Bernstadt, died May 29, 2020 at his home. His death from prostate cancer was confirmed by his wife of 46 years, Linda Stahl Finley. He was a reporter and feature writer for The Courier-Journal of Louisville for 25... View Obituary & Service Information

The family of John Allen Finley created this Life Tributes page to make it easy to share your memories.

Send flowers to the Finley family.