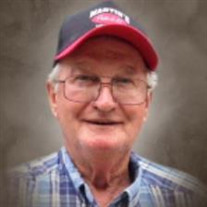 This is a courtesy obit for Britton Funeral Home in Manchester, KY. J.D. "Black Stallion" Hacker, 85, of Bear Branch, KY, passed away Wednesday, April 10th, at the University Of Kentucky Medical Center. J.D. was born in Manchester, KY on... View Obituary & Service Information

The family of J.D. "Black Stallion" Hacker created this Life Tributes page to make it easy to share your memories.

This is a courtesy obit for Britton Funeral Home in Manchester,...