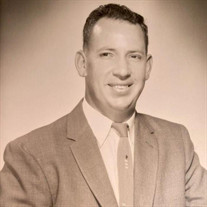 Herbert Lee Scott, age 93, of Knoxville, Tennessee passed away on Friday, June 10, 2022. He leaves behind three children: Kay Woolums & husband Mike; their daughter, Christina Woolums & her children, Caroline Woolums & Adam Collier; their son, John Woolums & his children, Jelsie Woolums & John Michael Woolums; Gerald Scott & wife Susan; their children, Gerri, Melissa, TJ & Brandon; their grandchildren, Sean, Cassie, Hunter, Gage, Noah; Gloria Ogilvie & husband Garry; their children, Valerie McVey & husband Clarence, Jeannette Ogilvie; two brothers-in-law, Paul Swain and Bill Mitchell; several nieces and nephews plus a host of other family and friends to mourn his passing. He was preceded in death by his wife of 67 years, Fay Swain Scott; his parents, Louis and Addie Scott; one sister, Hasilean Harris, along with several nieces and nephews. At the age of 17, Herbert joined the United States Navy and was a WWII veteran. After serving in the Navy and returning home, he met the love of his life, Fay Swain. They married and had three children, Kay, Gerald and Gloria. Herbert worked for United States Steel in Lynch, Kentucky for 34 years before retiring. He was a hard worker. He and Fay then moved to Knoxville, Tennessee where he enjoyed gardening, hunting and fishing. He was also a Ham Radio Operator for many years. Herbert was a member of Cornerstone Baptist Church where he taught the men’s Sunday School class. He was a loving and devoted husband, father and grandfather. A graveside service for Herbert Lee Scott will be held on Thursday, June 23, 2022 at 11:00 a.m. at Jellico Creek Baptist Church Cemetery, 9004 HWY 92, Williamsburg, Kentucky with Homer Johnson officiating. The family has entrusted House-Rawlings Funeral Home with the arrangements.

The family of Herbert Lee Scott created this Life Tributes page to make it easy to share your memories.

Send flowers to the Scott family.