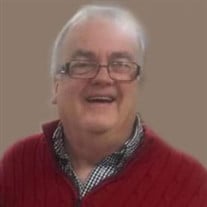 Gary Len Osborne, age 65, of London, Kentucky passed away on Monday, September 21, 2020. He leaves behind his loving wife, Anissa Jones Osborne; two daughters, Leslie Wyatt & husband Jeff and Brittiany Taylor & husband Donnie, all of London, KY; two sisters, Gail Gilbert & husband Larry and Mary Henderson & husband Daniel, all of London, KY; his sister-in-law, Sandy Osborne of Mt. Juliet, TN; six grandchildren, Kaitlyn Clarke Wyatt, Kayden Chance Wyatt, Kristian Camden Wyatt, Jaren Addison Taylor, Jalen Bree Taylor, and Karmin Chayse Wyatt, plus a host of other family and friends to mourn his passing. He was preceded in death by his parents, Leonard Osborne and Alberta Foster Osborne; and by his brother, John L. Osborne. Gary’s favorite place to be was at home or camping at Levi Jackson, surrounded by his wife, daughters, grandchildren and friends. He retired from St. Joseph London in 2017 as Director of Radiology. He was active at Living Hope Church, and one of his greatest joys was teaching the “mens” Sunday School class at West London Baptist Church for over 20 years. Gary’s favorite pastimes were fishing with his grandchildren, working in the building fixing toys or whatever they broke that week, and watching them play baseball, softball, basketball and football. Funeral services for Gary Len Osborne will be held on Thursday, September 24, 2020 at 1:00 p.m. in the chapel of House-Rawlings Funeral Home with Bill Mays and Lynn Dotson officiating. Burial will follow at A. R. Dyche Memorial Park. The family will receive friends on Wednesday, September 23, 2020 beginning at 6:00p.m. also at the funeral home. The family has entrusted House-Rawlings Funeral Home with the arrangements.

The family of Gary Len Osborne created this Life Tributes page to make it easy to share your memories.

Gary Len Osborne, age 65, of London, Kentucky passed away on...

Send flowers to the Osborne family.