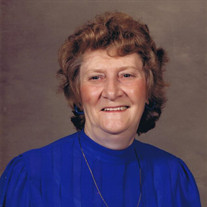 Eula Bowling Webb was born on July 21, 1927 at Urban, Kentucky in Clay County. She went to her heavenly home on Wednesday, July 24, 2019, having lived here on this earth 92 years and 3 days. She lived her early life in the Urban Community with her parents, Ballard and Eliza Minton Bowling; her brother, William Banton; and her sister, Wilma. Eula came to know Jesus Christ as her Lord and Savior as a young girl attending Lebanon United Baptist Church. In 1955, she became a member of Horse Creek Baptist Church, Manchester, KY, where her membership remained until her death. She began her working career as a schoolteacher in the Clay County School system, having acquired her education at Sue Bennett College and Eastern Kentucky University. Later, she was employed by American Greeting Corporation, working there 30 years before retiring. Upon retirement she kept busy serving with the Auxiliary team of Marymount Hospital, visiting regularly with the elderly at Laurel Heights Nursing Home, and taking every opportunity to travel with her senior friends of First Baptist Church. One of her most memorable trips was a two-week excursion with the Kentucky WMU which included many sites in Washington DC, visiting many religious and historical sites in Virginia, and attending the WMU’s 100-year Centennial Celebration in Richmond, Virginia. If anyone was ever eager and ready to travel, it was Eula. While she was still able to drive, she was always on the road to visit family, friends, and shut-ins. When you saw her coming to visit, you knew she would have her special homemade oatmeal cookies in tow. She loved cooking for her family, never forgetting to make sure each family members favorite dish was on the table. Eula loved to sew and quilt, seeing that each family member was given their own special quilt she made for them. In addition to her parents, Eula was preceded in death by her brother and sister-in-law, William Banton (Bill) Bowling and wife Ada Lee; her son, Billy Lynn Webb; her stepson, John Jerome Webb; and the father of her children, Beve Webb. She leaves to mourn her passing and celebrate her life: her three children, Beverly Hart and husband, Roger; Charles Webb and wife, Wilma; Benard Webb and wife, Sheila; her sister, Wilma Nicholson and husband Stanley; and daughter-in-law Lucille Webb. She leaves 7 grandchildren: Derrick Webb, Keri Reynolds and husband Adam, Charlissa France and husband Brian, Amanda Lyttle and husband Wesley, Tori Gambrel, John David Webb and wife Michelle, and Scott Hart and wife Lisa. Eula was blessed with 9 great-grandchildren: Caden and Jate France; Cayden Smith and Kennedy Lyttle; Kylie, Karcee, and John Landon Webb; and Riley and Lucas Hart. She was known as “Aunt Eula” to many beloved nieces and nephews and was lovingly known as “E” by two special boys, Walt and Rhett Woods. Miss Eula leaves many other friends, caregivers, and family who will reflect on her life and the wonderful times and special relationships they shared. A Celebration of Life Service for Eula Bowling Webb will be held at 1:00 P.M. Saturday, July 27, 2019, in the House Rawlings Funeral Home chapel with Reverend Wayne House officiating. Pallbearers will be family members. She will be buried between her brother and son at the Reuben Bruner Cemetery at Marydell, KY. The Webb family will receive friends at the House Rawlings Funeral Home on Saturday from 11:00 A.M. until the funeral hour at 1:00 P.M. House Rawlings Funeral Home will be in charge of arrangements.

Eula Bowling Webb was born on July 21, 1927 at Urban, Kentucky in Clay County. She went to her heavenly home on Wednesday, July 24, 2019, having lived here on this earth 92 years and 3 days. She lived her early life in the Urban Community... View Obituary & Service Information

The family of Eula Bowling Webb created this Life Tributes page to make it easy to share your memories.

Send flowers to the Webb family.