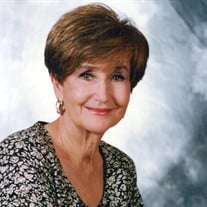 Ernestine Ratliff McCoy, age 81, passed peacefully in her home on June 4, 2021. She was born on February 5, 1940 in Elkhorn City, Kentucky to Herman and Neva Pauline Ratliff. She married Raymond L. McCoy in September of 1963, who preceded her death in 1988. Ernchie’s life goal was to be a housewife and a mother. After Raymond’s death, she was propelled into the workforce. For a brief period time, she worked in a grocery store deli, but couldn’t deal with the concept of the 10 minute break because she didn’t have enough time to drink her coffee. She went on to join a road construction crew working as a flagger and then a roller operator. Given that she was one of the worst drivers on the highway, her career operating heavy equipment was short lived. In the early 90’s, she became a vender at Flea Land Flea Market, selling everything from knives and dolls to work clothing. With the blessings of God, that business has thrived for over 25 years. Ernch was an avid reader who loved coffee and chocolate. Friends and strangers were always welcome in her home where she shared her appreciation of antiques, fine china, silver tea sets and cloth napkins. Ernchie’s greatest legacy was her love of God, which reflected in how she treated people. She was compassionate when compassion was not always deserved. She forgave people even before they could confess their wrong doing. She spent countless years taking care of her elderly parents as well as various friends and neighbors who suffered terminal illnesses. Ernchie gave Godly counsel to those who were in spiritual crisis and prayed with countless people for healing and deliverance. She taught her children to serve the Lord and to love Israel. She was a true servant of God and her children called her blessed. Ernch is survived by her daughter, Tara Hall and her husband, Michael of London, Kentucky; her son, Miles Chance McCoy and his wife, Rachael Schneider, of London, Kentucky; one grandchild, Jane Michael-Anne Nicole Hall of London, Kentucky; two brothers, Ravine Ratliff of Belcher, Kentucky and David Ratliff and his wife, Sandy, of Ashcamp, Kentucky, three nieces, Dina Williamson of Belcher, Kentucky, Kim Stewart of Draffin, Kentucky and Rachael Ratliff of Frankfort, Kentucky and two nephews, Herman Wade Ratliff of John’s Creek, Kentucky and Shannon Ratliff of Ashcamp, Kentucky. Special mention is given to William, Sara, Anna and Elizabeth Schneider who were like grandchildren to her. Ernch was preceded in death by her parents Herman and Neva Pauline Ratliff of Ashcamp, Kentucky, her sister, Christine Williamson of Belcher, Kentucky, her paternal grandparents, Tye and Georgia Ratliff of Belcher, Kentucky and maternal grandparents, Burley and Lena Looney of Belcher, Kentucky, her nephew, Jeffrey Williamson of Belcher, Kentucky, her cousin, Patricia Matney of Abington, Virginia as well as her sister in law, Karen Sue Ratliff, of Belcher, Kentucky. The family has entrusted House-Rawlings Funeral Home with the arrangements.

Ernestine Ratliff McCoy, age 81, passed peacefully in her home on June 4, 2021. She was born on February 5, 1940 in Elkhorn City, Kentucky to Herman and Neva Pauline Ratliff. She married Raymond L. McCoy in September of 1963, who preceded her... View Obituary & Service Information

The family of Ernestine "Ernchie" McCoy created this Life Tributes page to make it easy to share your memories.