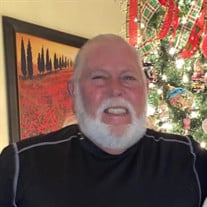 Doug Baker, age 62, of London Kentucky passed away Friday, May 15, 2020 at his home He leaves behind his amazing wife of 44 years Debbie Baker; his mother Janet K. Baker; He leaves behind his daughter Jenn Dagley and her husband Bob of London; He leaves behind his brother Keith Baker of London as well. He also leaves behind his most precious granddaughters, Maddie, Abby, and Shelby Dean Dagley, plus a host of other friends and family to mourn his passing. He was preceded in death by his Father Clayton Baker and his two sons Douglas Barry and William Dean Baker. Doug was a veteran of the United States Marine Corps. He moved back to KY in 1981 where he began his 33 year career as a UPS Driver. He also worked on his family farm raising tobacco most of his life. Doug was of the Methodist faith. Doug was also known throughout the community as one the biggest supporters of girls Fast Pitch Softball. Teaching the young girls in our community the knowledge, passion and love of this game. He was a key component in bringing fast pitch to the state in the early 90’s when he coached his daughter. Soon after she graduated, he got another group together and was a pivotable part of their success which included the 1st and only State Championship at North Laurel. And the last 12 years he has LOVED watching and coaching his granddaughters. He was a coach on the 2016 Little League State Championship with his granddaughter Abby. He was always so passionate about the game…. he loved the relationships he developed with the players. He was lucky enough to take his girls throughout every state in the SEC. He loved to see and meet new people, new foods, new cultures, and was always teaching! He could always make you laugh, take off the pressure, tell you that you were unstoppable! Followed by the Marine Corps battle cry….”Hooah!” A private graveside service will be held for Doug Baker on Tuesday at Merrimac Cemetery with Mike Dixon officiating and Military Honors provided by the local DAV Chapter 158 of Keavy, KY. The family has entrusted House Rawlings Funeral Home with the arrangements. Doug has persistently requested that NO flowers be purchased for his ceremony. He was very specific in his request for an Education Fund to be started for his Special Needs granddaughter Shelby Dean. We hope to have the link up and active by Monday! The family will be having a Celebration of Life ceremony late this summer at their home. Day/Times will be announced at a later date!

The family of Doug Baker created this Life Tributes page to make it easy to share your memories.

Doug Baker, age 62, of London Kentucky passed away Friday, May...

Send flowers to the Baker family.