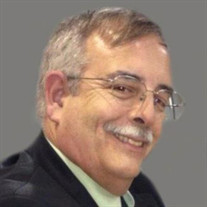 Donald L. Casey, age 66, of Corbin, Kentucky passed away on Sunday, August 16, 2020. He leaves behind his loving wife of 42 years, Terri Bolli Casey; three children, Shauna Smith & husband Lucas of Waynesville, MO, Erin Freeman & husband Johnny of Myrtle Beach, SC, Thomas (T.J.) Casey & wife Gayla of Lawrenceburg, KY; his sister, Patricia Dowdy of Norman, OK; six grandchildren, Shianna Freeman, Anthony Freeman, Taylor Freeman, Kelen Smith, Kyler Freeman, and Blaire Casey,plus a host of other family and friends to mourn his passing. He was preceded in death by his parents, Jesse B. Casey and Verna Flatt Casey; his brother, Ronald Casey; and by his brother-in-law, Ronald Dowdy. Donald was a veteran of the United States Air Force where he served for 10 years. He retired from J. C. Penney where he worked for 29 years and was the store manager. He was also manager of Dollar General for 2 years. Donald was of the Methodist faith. A memorial service for Donald L. Casey will be held on Friday, August 21, 2020 at 11:00 a.m. at First United Methodist Church in London, KY with Rev. Sean Ryan officiating. Military honors will be provided by the local DAV Chapter 158 of Keavy, KY. The family will receive friends on Friday, August 21, 2020 beginning at 10:00 a.m. until the service hour also at the church. The family has entrusted House-Rawlings Funeral Home with the arrangements.

The family of Donald L. Casey created this Life Tributes page to make it easy to share your memories.

Send flowers to the Casey family.