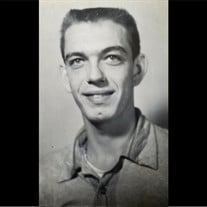 Donald Carl Gilbert, better known to friends and family as Carl or Frosty, age 81 of Blackwater Church Road in London, Kentucky, passed away on Thursday, April 28th at St. Joseph Hospital, London KY. He retired as a supervisor after 32 years employment at Bethlehem Steel in Burns Harbor, Indiana. His hobbies included gardening and harassing his neighbors. He was preceded in death by his parents, Theo Gilbert and Verda Rowland Gilbert; three brothers, Kenneth Gilbert, Ray Gilbert, Nathan Gilbert and a sister, Tevis Gilbert; three children; a son, Wade, and two daughters, Carla Patricia and Rhonda Kay. He is survived by his wife, Vivian and a son, Mark (Mia) of Sorrento, FL; four grandchildren, Bret (Alesha) Rattray, Blake Rattray, Kailee Gilbert, Declan Gilbert and four great-grandchildren. He is also blessed with nieces and nephews and a host of other relatives and friends to mourn his passing. The family will receive friends on Monday, May 2, 2022 beginning at 10:00 a.m. followed by the graveside service at Gilbert Sasser Cemetery, London, KY, beginning at 11:30 a.m. with Rev. Terry Gabbard officiating. There will be a procession to the cemetery that will leave the funeral home at 11:00 a.m. The family has entrusted House-Rawlings Funeral Home with the arrangements.

The family of Donald Carl Gilbert created this Life Tributes page to make it easy to share your memories.

Send flowers to the Gilbert family.