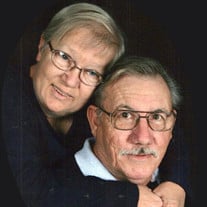 Diane Lou Smith, age 72, of London, Kentucky passed away on Thursday, April 15, 2021. She leaves behind her loving husband of 52 years, Robert C. Smith Sr; three children, Joyce Loper of London, KY, April Tuttle of Barbourville, KY, Robert Smith & wife Charity of London, KY; four grandchildren, Crystal Fry of Connersville, IN, Jasmine Smith of London, KY, Alexis Moore of London, KY, Michael Tuttle of Barbourville, KY; two great grandchildren, Leijah Roberts and Gabriella Edwards, plus a host of other family and friends to mourn her passing. She was preceded in death by her parents, Samuel F. Brown and Gloria Sackett Brown; her son, Tony Lee Smith; two siblings, Charlene Hill and Terry Brown. Diane was a homemaker and of the Baptist faith. She was an alumnus of the Indiana School for the Deaf. She was very loving toward her entire family. Funeral services for Diane Lou Smith will be held on Monday, April 19, 2021 at 4:00 p.m. in the chapel of House-Rawlings Funeral Home. Burial will follow at Cumberland Memorial Gardens in Lily, Kentucky. The family will receive friends on Monday, April 19, 2021 beginning at 3:00 p.m. until the funeral hour also at the funeral home. The family has entrusted House-Rawlings Funeral Home with the arrangements.

The family of Diane Lou Smith created this Life Tributes page to make it easy to share your memories.