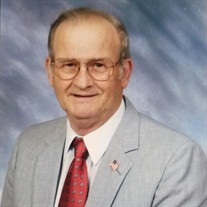 Dallas Riggs, age 82, of London, Kentucky passed away on Saturday, May 29, 2021. He leaves behind his loving wife, Martha Annalee Hammons Riggs; three children, James Dallas Riggs & wife Debbie of Franklin, IN, Mark Douglas Riggs & wife Tammy of Fairfax, VA, Margaret LeeAnne Childress & husband Keith of London, KY; six grandchildren, Austin James Riggs & wife Brooke of Franklin, IN, Nicholas Scott Browning & wife Bethany of London, KY, Owen James Thomas Riggs of Franklin, IN, Tessa Kaitlyn Riggs of Fairfax, VA, Daniel Blake Childress of London, KY, Sarah Rebecca Childress of London, KY, plus a host of other family and friends to mourn his passing. Dallas was excitedly expecting the birth of his two great-grandchildren this year. He was preceded in death by his parents, John Harry Riggs and Viola Margaret Tincher Riggs; and eight siblings, Mary Ellen Roller, Bernice Wilson, Eugene Riggs, Donald Riggs, Almon Riggs, Denzil Riggs, Billy Riggs, Harry Vonzel Riggs. Dallas Hiram Riggs was born July 31, 1938 in Tyner Kentucky. At the age of eight, he was cutting hair at the family store. He attended school in Tyner, KY and worked as a carpenter before joining the U.S. Army in January 1959. He served in the Second and Third Infantry Divisions. Dallas quickly rose to the rank of Sergeant and was sent to Bamberg, West Germany where he commanded a reconnaissance team. He finished in Ft. Benning, GA as a Drill Instructor. Following his stay with the military, Dallas studied electronics as he raised his family in Indianapolis, IN. He returned to Kentucky in the early 1970’s and opened a TV repair shop. He later became Chief Engineer of Tremco Inc. and later at Chappell Dairy. In the early 1980’s, Dallas became the co-owner and Manager of Chappell’s Electric in London. Dallas later continued his formal education and became an instructor at the Laurel Technical College where he taught Industrial Electricity/Electronics until his retirement in 2000. Dallas surrendered to the faith in 1972 and was ordained a Minister at Slate Hill Church in 1985. He began a long career in the service of God. He was renowned for his selflessness, charity and compassion as he served the community’s spiritual needs. Funeral services for Dallas Riggs will be held on Monday, May 31, 2021 at 2:00 p.m. in the chapel of House-Rawlings Funeral Home with Bro. Johnny Jervis and Bro. Roger Williams officiating. Burial will follow at Slate Hill Baptist Church Cemetery in London, Kentucky. Military honors will be provided by the local DAV Chapter 158 of Keavy, Kentucky. The family will receive friends on Monday, May 31, 2021 beginning at 11:00 a.m. until the funeral hour also at the funeral home. Pallbearers will be Austin James Riggs, Nicholas Scott Browning, Owen James Thomas Riggs, Daniel Blake Childress, Keith Childress, Marty Riggs and Carl Westerfield. Honorary pallbearers are Odis Baker and Conn Moren. The family has entrusted House-Rawlings Funeral Home with the arrangements.

The family of Dallas Riggs created this Life Tributes page to make it easy to share your memories.

Dallas Riggs, age 82, of London, Kentucky passed away on Saturday,...

Send flowers to the Riggs family.