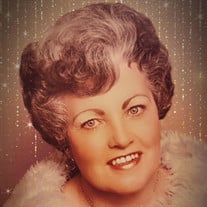 Corina Wyan, age 84, of Mesquite, Texas, and formerly of London, Kentucky, passed away after a struggle with ongoing illnesses on Friday, August 27, 2021. She leaves behind two daughters, Joyce Ann Nelson & husband Alan of Mesquite, TX, Sheila Lynn Holcomb & husband David of Caddo Mills, TX; two sisters, Jewelene Evert and Georgia Maxey, both of London, KY; four grandchildren, Christopher Holcomb & spouse Christina of Murphy, TX, Chelsea Holcomb & spouse Ralph Smith of Fate, TX, Ryan Holcomb of Caddo Mills, TX, Shelby Nelson of Mesquite, TX; three great granddaughters, Sophia Veal, Corina Smith, and Aria Holcomb; her companion cat, Little Bitty Pretty One, plus a host of other family and friends to mourn her passing. She was preceded in death by her husband, William F. Wyan; her father, Charlie Roark; her mother and step-dad, Bertha Simpson and Martin McFadden; her granddaughter, Amanda Holcomb; and her grandparents, Boone Simpson and Martha Brummett. Corina Wyan was raised in the Redbird area and moved as a teen to the London suburbs. She was reared from humble beginning, working as a waitress where she met her soulmate and on Dec. 24th, 1958, they were married and remained so the rest of their lives. After the birth of their girls, jobs were scarce so Bill moved his family to Dallas to pursue a better life. Corina was a ultimate homemaker and caregiver for the family. Along with raising a family she also worked. She retired after 26 years at Sears only to return to work as a clerk for the City of Dallas Police Department and retire again with another 23 years. She had a strong foundation of faith in God. She was accustomed to the Baptist faith but in later years she maintained membership at The Cumberland Presbyterian Church of Mesquite. Corina enjoyed spending time with her family and her cat, Itty Bitty. She loved to fish and went on many trips with her husband. Having loved the outdoors, she could often be found working in her yard and flowers. She maintained the passion of cleaning and was rarely seen without her broom. She was a true homemaker and cook. She made everyone feel as family and that they were home. A Graveside Prayer (not a Graveside Service) for Corina Wyan will be held on Saturday, September 4, 2021 at 11:00 am at Cumberland Memorial Gardens in Lily, KY. The family will receive friends on Saturday, September 4, 2021 beginning at 9:30 a.m. until the funeral procession that begins at 10:30 a.m. in the chapel of House-Rawlings Funeral Home. A Celebration of Life will be arranged and announced by the family at a later date. The family has entrusted House-Rawlings Funeral Home with the arrangements.

The family of Corina Wyan created this Life Tributes page to make it easy to share your memories.

Corina Wyan, age 84, of Mesquite, Texas, and formerly of London,...

Send flowers to the Wyan family.