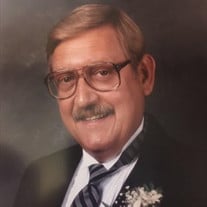 It's with great sadness and joyful remembrance we announce the passing of Claude Edward Thomas, age 84, on January 18, 2020. He leaves behind his loving wife, Janice Bundy Thomas; three sons, James Edward Thomas & wife Tonya of Inverness, FL, Mark Anthony Thomas & wife Melisa of Corbin, KY, Kevin Thomas & Melissa of Gray, KY; four stepchildren, Keith Bundy & fiancé Brenda, Kenneth Bundy & wife Loretta, Kelvin Bundy & wife Renee, Kathy Bundy, all of London; one brother, Dr. Robert Thomas of North Dakota; fifteen grandchildren; twenty-four great grandchildren; one great, great grandchild, plus a host of other family and friends to mourn his passing. He was preceded in death by his parents, Samuel and Sarah Johnson Thomas; four siblings, Earl Thomas, Ben Thomas, Margret Bolton, and Edith Saylor. Ever the adventurer, he spent years traveling and camping with his beloved Moonbow Camping Club. These trips were filled with family, friends, music, laughter, campfires, and marshmallows. The RV motorhome he shared with his wife, Janice, was often filled with his grandchildren for days at a time. He taught them all to build and tend to a fire. He showed them how to make nature's glow sticks with the glowing end of smoldering twigs and then turn them into sidewalk chalk. He was always willing to scoop up a little one for a dance while the old record player filled the room with music. He'd been known to sneak a quick kiss from Janice when he thought nobody was looking. He was a family man, a loving husband, father, grandfather, and an honored Veteran of the Air Force. We will think of him at the backyard fires as we pass on the tricks he taught us to our children, while watching football on Thanksgiving, while watching his beloved Wildcats, when Rockin' Around The Christmas Tree plays, and all the times in between. Claude entered the United States Air Force in 1952 and retired with twenty years of service in 1973. He served two years in Vietnam and was awarded the Air Force Commendation Medal, the Bronze Star Medal for action in Vietnam, and he was a Purple Heart recipient. He also retired from Certainteed/CTA Acoustics in 2000 with 27 years of service. Claude was named a Corbin Colonel in 1977 and a Kentucky Colonel in 1978. He was a 32° Mason in the Hugh Harris Lodge, a 32° Lexington Scottish Rite, a Shriner, and also a member of the Shrine Legion of Honor. Funeral services for Claude Edward Thomas will be held on Tuesday, January 21, 2020 at 6:00 p.m. in the chapel of House-Rawlings Funeral Home with Benny Bush officiating. Burial will follow on Wednesday, January 22, 2020 at 10:00 a.m. at the Bentley-Burkhart Cemetery in London, Kentucky. Military honors will be provided by the local DAV Chapter 158 of Keavy, KY. The family will receive friends on Tuesday, January 21, 2020 beginning at 4:00 p.m. until the funeral hour also at the funeral home. The family has entrusted House-Rawlings Funeral Home with the arrangements.

The family of Claude Edward Thomas created this Life Tributes page to make it easy to share your memories.

It&#39;s with great sadness and joyful remembrance we announce the...

Send flowers to the Thomas family.