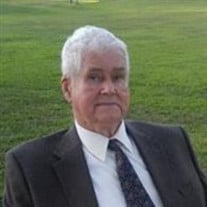 Charles Woodson Owen age 87 of Burkesville, KY passed away on Friday, June 11, 2021 at Hospice House of Southern Kentucky in Bowling Green. He was born on July 18, 1933 to Elly Lafayette and Lula Kathryn Wyan Owen in London, KY. He shared his life with the love of his life, Juanita Bundy Owen, from their marriage on October 5, 1957 until her death on May 24, 2009. Charles was worked for many years as an independent oil and gas well drilling and service contractor, after starting working at a young age with his father as a logger and sawmill operator. He also worked as a water plant operator, and at the Indiana Army Ammunition Plant. He served his country in the US Army and KY Army National Guard for almost 40 years (39 years, 8 months and 11 day!) retiring as a Master Sergeant, and served his community as Scout Master for the Boy Scouts of America. He was of the Methodist faith. He enjoyed spending time with his family sharing home cooked meals, and outdoor activities that including camping, boating, gardening, whittling, exploring, taking long drives, grilling, or just sitting outside. He is survived by a daughter, Sandra Kay Owen of Nashville, TN, a son, Charles Douglas Owen of Monroe, TN; was “Poppy” to two beloved granddaughters, Lindsey Brooke Bailey and her husband Lance of Texarkana, TX, and Bethany Morgan Owen, of Pall Mall, TN. Sisters-in-law and brothers-in-law, Gladys Bundy, Springboro OH, Molly Bundy, New Albany, IN, Jewell Taylor, Westland, MI, Carol (Gary) Marcum of Merritt Island. FL, Homer Lee (Linda) Bundy, Gene (Ruby) Bundy, Clemons (Marna) Bundy, all of London, KY, many nieces and nephews, and a dedicated caregiver, Joan Harris. In addition to his parents and wife, he was preceded in death by his sisters Ruth Owen Knarr, Martha Owen, and Nancy Owen Starnes, and his brother George W. Owen. Funeral Service: Monday, June 14, 2021 at 10:00 A.M. at Ballou & Stotts Funeral Home, 304 N. Main Street, Burkesville, KY. Family requests visitation on Sunday, June 13, 2021 from 5 P.M. until 9 P.M. and on Monday from 6 A.M. until the service time at 10 A.M. at Ballou & Stotts Funeral Home. A Graveside service and burial with military honors in Whittaker Cemetery in Laurel County, KY at 2 P.M. CT , 3 PM ET Expressions of sympathy may take the form of a donation to WE CARE, P.O. Box 695, Burkesville, KY 42717 or may be left at the funeral home This is a courtesy obituary for Ballou & Stotts Funeral Home.

Charles Woodson Owen age 87 of Burkesville, KY passed away on Friday, June 11, 2021 at Hospice House of Southern Kentucky in Bowling Green. He was born on July 18, 1933 to Elly Lafayette and Lula Kathryn Wyan Owen in London, KY. He shared his... View Obituary & Service Information

The family of Charles Woodson Owen created this Life Tributes page to make it easy to share your memories.

Charles Woodson Owen age 87 of Burkesville, KY passed away on...

Send flowers to the Owen family.