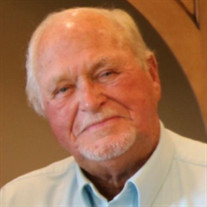 Charles Ray Alexander, age 78, of London, Kentucky passed away Friday, June 14, 2019 at UK Medical Center in Lexington, Kentucky. Charles was born July 14, 1940 in Chunky, Mississippi and was the son of the late Arnold Rufus Alexander and Mattie Lavenia Kilpatrick Alexander. He had 4 brothers and 6 sisters. He was preceded in death by 8 of his siblings, D.L., Myrtis, Mavis, Iva, James, Arnold, Erma and Sylvia. He is survived by his wife of 53 years, Phyllis Jean Burkhart Alexander. He is also survived by two sons, both of London, KY, Charles Randall Alexander and wife Lisa, and their two children, Rachel Allison Alexander and Landon Mitchell Alexander, and Steven Craig Alexander and wife Greta and their two children, Griffin Craig Alexander and Eli Steven Alexander, a sister, Myra Lynette Dean of Little Rock, MS, a brother, Michael Wayne Alexander of Little Rock, MS, and a host of nieces, nephews, cousins, and friends to mourn his passing. Charles served in the Air Force from 1961 to 1963. He was a cable splicer and owner of A & B Splicers and Tel-Tec, Inc. He was a Gideon, and was an active member of Lily Baptist Church in Lily, KY, where he served as a deacon and Sunday school teacher. Funeral services will be held at House-Rawlings Funeral Home in London, KY, with visitation being on Wednesday, June 19, 2019, from 7:00 to 9:00 p.m., and the funeral on Thursday, June 20, 2019, at 1:00 p.m. Wilmer Evans and Allan Evans will be officiating. Burial will follow at Cumberland Memorial Gardens, Lily, KY. In lieu of flowers, donations can be made to Gideons International, P.O. Box 131, London, KY 40743. The family has entrusted House-Rawlings Funeral Home with the arrangements.

The family of Charles Ray Alexander created this Life Tributes page to make it easy to share your memories.

Send flowers to the Alexander family.