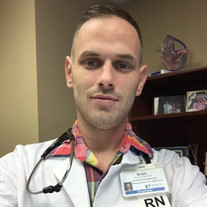 Brian Scott Beckner was born on October 25, 1981 in London, Kentucky. He was a resident of Louisville, Kentucky. He is survived by his parents, Willis and Betty Beckner of London, KY; one sister, Loretta Zaiger and husband Mike; and his beloved nieces Maelene and Miriam. He is also survived by a host of aunts, uncles, cousins and dear friends that mourn his passing. He was preceded in death by his grandparents, Earl and Daisy Beckner of London, KY and Canton and Hattie Jacobs of Pippa Passes, KY. Brian was a registered nurse and received degrees from the Galen School of Nursing, Walden University, Western Governors University and Spencerian University. He was employed for many years as a specialized care nurse, and later as nursing supervisor at Norton’s Health Care in Louisville, KY. While at Norton’s, he received many awards for excellent nursing care. Brian was a champion for providing much needed health care and services to Vietnam Veterans, like his father. He also served as an adjunct professor at ATA College in Louisville, KY. He was a world traveler (along with his mother, Betty). They visited lots of countries including England, Scotland, Egypt, France, Italy, Turkey, Mexico and Australia. He also served as a nursing exchange student in Australia. Brian was an avid animal lover and participated in the Boston Terrier Rescue Society in Louisville. He was able to help many dogs with caring homes. His beloved dogs, Winston and Tyson were rescue dogs. He was a member of Mt. Zion Church of Christ. Funeral services for Brian Scott Beckner will be held on Wednesday, March 9, 2022 at 1:00 p.m. at Mt. Zion Church of Christ in London, Kentucky with Dr. Connie Hodge and Jerry Brown officiating. Burial will follow at Beckner Cemetery in London, Kentucky. The family will receive friends on Wednesday, March 9, 2022 beginning at 11 a.m. until the funeral hour also at the church. The family has entrusted House-Rawlings Funeral Home with the arrangements.

Brian Scott Beckner was born on October 25, 1981 in London, Kentucky. He was a resident of Louisville, Kentucky. He is survived by his parents, Willis and Betty Beckner of London, KY; one sister, Loretta Zaiger and husband Mike; and his beloved... View Obituary & Service Information

The family of Brian Scott Beckner created this Life Tributes page to make it easy to share your memories.

Send flowers to the Beckner family.