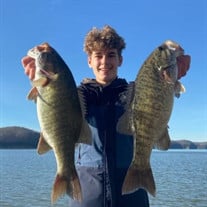 Brady Bridges, age 19, of East Bernstadt, Kentucky passed away on Sunday, January 3, 2021. He leaves behind his parents, James and Tiffany Hubbard Bridges; his sister, Ashton North & husband Hunter of East Bernstadt, KY; his grandparents, Martha Hubbard, Charles & Mary Whitaker, James & Carol Bridges; his aunts and uncles, Jim & Stephanie Sanders of London, KY, Daryl & Bonnie Chidsey of North Ridgeville, OH, John & Stephanie Bridges of Lawton, OK, Tim & Dusti Brooks of Knoxville, TN; his cousin, Morgan Robinson, who was like a brother to him; along with his other cousins, Shannon McConaughey, Brandy McConaughey, Jay Jay Bridges, Casandra Stevens, Connie Brooks, Lexi Bridges; plus, a host of other family and friends to mourn his passing. Brady was a Senior at Penn Foster High School and a member of Carmichael Community Church. He also worked at Southern States. He loved to fish and was involved with the North Laurel High School bass fishing team. Brady enjoyed doing everything outdoors and loved to be on the water. He was extremely fun-loving and outgoing. Funeral services for Brady Bridges will be held on Friday, January 8, 2021 at 1:00 p.m. in the chapel of House-Rawlings Funeral Home with Jeff Lewis and Denny McCowan officiating. Burial will follow at Andes Cemetery in East Bernstadt, Kentucky. The family will receive friends on Thursday, January 7, 2021 beginning at 6:00 p.m. also at the funeral home. The family has entrusted House-Rawlings Funeral Home with the arrangements.

The family of Brady Bridges created this Life Tributes page to make it easy to share your memories.

Send flowers to the Bridges family.