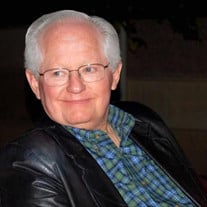 Billy Ray Moore, 85, passed away on December 8, 2019, in Phoenix, Arizona, after a long battle with Alzheimer’s disease. Born in Jackson County, KY on July 14, 1934, he was the son of Paris Armstrong Moore and Beatrice Hurley Moore. Upon graduating from Annville Institute, Bill soon enlisted in the US Air Force; while home on leave, he met and later married the love of his life, Bobbie Pauline Cupp. After serving his term in the Air Force, the couple made their home in London, KY, where they raised their family. A long-time resident and business owner in London, Bill was a man of integrity who thoroughly enjoyed sales and interacting with his customers. He relocated his family to Scottsdale, Arizona, in 1975, where he owned and operated a jewelry business, Washington Jewels, until he retired in 2003. Bill leaves behind his beloved wife, Bobbie; 4 sons: Steven Moore (Pam), Marlon Moore (Lisa), Darren Moore (Julie), and Rodger Moore (Lisa); as well as 11 grandchildren and 18 great-grandchildren. He was preceded in death by his parents, his brother Howard Moore, and two grandsons, Austin Moore and Kade Rose. Bill leaves a legacy of faith that has had a great impact on each one blessed to call him “Dad”, “Papa”, and “Friend”. He gained great joy in studying scripture with Bobbie, spending time in the mountains with his boys, and gathering together with his ever-growing crew of grandchildren and great-grandchildren. A family graveside service was held at Hansen Mortuary in Scottsdale, AZ, on Friday, December 13, 2019. A celebration of life will be held at a later date. The family extends sincere thanks to Hospice of the Valley and the staff at The Enclave Senior Living of Anthem. This is a courtesy obituary for Hansen Mortuary in Scottsdale, AZ.

Billy Ray Moore, 85, passed away on December 8, 2019, in Phoenix, Arizona, after a long battle with Alzheimer&#8217;s disease. Born in Jackson County, KY on July 14, 1934, he was the son of Paris Armstrong Moore and Beatrice Hurley Moore.... View Obituary & Service Information

The family of Billy Ray Moore created this Life Tributes page to make it easy to share your memories.

Send flowers to the Moore family.