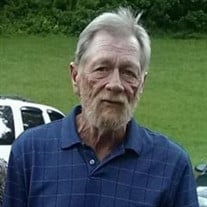 Billy Ray Hillard, age 67, of East Bernstadt, Kentucky passed away on Sunday, April 10, 2022. He leaves behind four children, Joyce Nicole Nantz, Rebecca Mae Nantz, Brian Albert Nantz, Joshua Hillard, all of East Bernstadt, KY; three siblings, Kay Albro & husband Kenny of Corbin, KY, Beverly Garcias of London, KY, Earl Wayne Isaacs & Sammy of McKee, KY; three grandchildren, plus a host of other family and friends to mourn his passing. He was preceded in death by his wife, Joyce Helton Hillard; his parents, Troy Hillard and Dorthy Angel; and by three siblings, Troy Hillard Jr., Ricky Hillard, Ronnie Hillard. Billy Ray was a hard worker, having worked previously in construction. He also served our country in the United States Army. He enjoyed being outdoors, going fishing and spending time with his granddaughter. Funeral services for Billy Ray Hillard will be held on Thursday, April 14, 2022 at 3:00 p.m. in the chapel of House-Rawlings Funeral Home with Joseph Youdell officiating. Burial will follow at Murray Cemetery in East Bernstadt, Kentucky. The family will receive friends on Thursday, April 14, 2022 beginning at 1:00 p.m. until the funeral hour also at the funeral home. In lieu of flowers, donations may be made in person, by phone or through the following link: https://www.paypal.com/donate/?hosted_button_id=6VUE57R5NGS8U The family has entrusted House-Rawlings Funeral Home with the arrangements. A Live Stream of the service can see seen by Clicking here

Send flowers to the Hillard family.