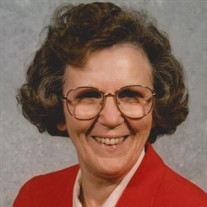 Mrs. Beulah Marie Reams Pennington, 97, of Frederick, Maryland died on Monday, November 16, 2020 at Homewood at Crumland Farms. She was the wife of the late Leon Burrell Pennington. Born January 21, 1923 in London Kentucky, she was the daughter of the late Betty Esther (Vaughn) Reams and Walter Jennings Reams, Sr. Like Loretta Lynn, Beulah Pennington grew up in Kentucky - a coal miner’s daughter living in a small house near London without modern conveniences such as WIFI or indoor plumbing. Beulah said that the outhouse was 20 feet too far in the winter and 20 feet too close in the summer. As a teen, Beulah left the holler and moved into town to care for the home and children of the House family. The family had a car repair shop where Leon Pennington worked. The Houses introduced Beulah Reams to her future husband, Leon Pennington. There were sparks (not the car type), but the romance would have to wait until the conclusion of the Second World War in 1945. Unlike Ms. Lynn, Beulah did not embark on a career in country music. Instead, at the urging of a friend and cousin, Beulah moved in 1942 from Kentucky to Chicago, where she lived with Helen Copple, now Helen Lively, and worked for Poster Products, Inc., sewing pup and hospital tents for the troops. From there, Beulah moved to Indiana, where she attended Ft. Wayne Bible College for a year - until Leon Pennington returned from the war. The couple married and lived in Knoxville, Tennessee while Leon attended the University of Tennessee receiving a degree in Biology. Life in Knoxville was eventful for Beulah, bringing both the arrival of her firstborn, Leon Preston Pennington, and an exciting job for the local A&P supermarket. In 1951, Beulah and Leon moved to Frederick, Maryland where Leon worked first as a microbiologist at Fort Detrick. Leon started night law school in 1957 at the University of Maryland and Beulah typed his class scribbling into readable law notes. Frederick, Maryland became Beulah’s home. Beulah started and ended her career working for the Frederick County Board of Education. She worked briefly at the Sabillasville Elementary School and Yellow Springs Elementary School. She then moved to the Transportation Department of the Frederick County Board of Education as a secretary. In Frederick, Beulah and Leon were blessed with another boy, Walter Allen Pennington, who reportedly was such an angel that Beulah had only to rattle a kitchen drawer pretending to look for a wooden spoon with which to swat him and the child would behave. In addition, Beulah furthered her education by attending Frederick Community College and Miss Willard’s School of Practical Arts, then at the corner of Rosemont and Wilson. Beulah was a member of many professional and civic organizations, including the Shookstown Civic Association, Gambrill Park Homemakers Club, Frederick County Educational Secretaries Association, Maryland State Secretaries Association and Frederick County Retired Services Personnel Association. Guiding Beulah’s entire life was her faith in the Lord Jesus Christ and her devotion to God. In 1946, Beulah joined the Church of the Nazarene and after moving to Frederick, she became a lifelong member of the Frederick First Church of the Nazarene. She taught Sunday school to two- and three-year-olds, served on the Church Board, participated in the Silver Liners and for years invited every new church member for dinner in her home. Though a faithful wife, Beulah had many loves, including dessert, pretty shoes and travel. Leon used to tease that at the mere mention of a possible drive in the car, Beulah would be waiting by the door with her coat on. Of the many places she visited, Cordova, Alaska and Bermuda were her favorites. In retirement, Beulah became a prolific painter who participated in shows at the Frederick Senior Center and Homewood at Crumland Farms. Rarely adverse to a shopping expedition, Beulah collected Fostoria, cobalt glass and sets of salt and pepper shakers. And, as anyone who was ever with her for longer than seven or eight minutes knows, Beulah loved to play games and would skin you alive at Chinese Checkers if you gave her the chance. Finally, people will best remember Beulah for her optimism, sunny disposition, smile and gift for bringing people together and creating community everywhere she went. Beulah Marie Pennington will be missed. Beulah is survived by her son, Walt (Janice) Pennington of San Diego, California. Beulah is also survived by her brother, Wayne (Judi) Reams of Clay, Michigan and sister, Roseanne (Larry) Roark of London, Kentucky. Preceding Beulah in death were her husband, Leon Burrell Pennington, her son, L. Preston Pennington, and her brothers and sisters, Hobert Reams, Ruby Reams McIntosh, William Raymond Reams, Walter Jennings Reams, Jr., Robert Earl Reams, Mary Thelma Smith, Franklin Delano Reams, Betty Idomy Reams, John Elmer Reams (“Johnnie”), Donnie Ray Reams and Lola Dean Reams. The family will receive friends from 10 a.m. to 11:30 a.m. on Friday, November 20, 2020 at Frederick First Church of the Nazarene, 7899 Opossumtown Pike, Frederick, MD 21702. A private service will follow. A graveside service will begin at 1 p.m. on Monday, November 23 at A.R. Dyche Memorial Park in London, KY. In lieu of flowers, donations may be made to Frederick First Church of the Nazarene. Arrangements are being handled by Stauffer Funeral Home, Frederick, Maryland and House-Rawlings Funeral Home in London, Kentucky.

Mrs. Beulah Marie Reams Pennington, 97, of Frederick, Maryland died on Monday, November 16, 2020 at Homewood at Crumland Farms. She was the wife of the late Leon Burrell Pennington. Born January 21, 1923 in London Kentucky, she was the daughter... View Obituary & Service Information

The family of Beulah Marie Reams Pennington created this Life Tributes page to make it easy to share your memories.