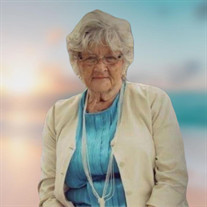 It is with great sadness that the family of Alice “Faye” Gaither Jones announces her passing on Friday, March 18, 2022, at the age of 83. She passed away in the comfort of her home, surrounded by her loving family. Faye was born in Oxford, Alabama on October 21, 1938. She eventually moved with her family to Gary, Indiana where she met and fell in love with Mitchell Jones. When they decided to marry, Indiana state laws prevented the union. This spurred them to move to the state of Kentucky where marriage laws were less strict and the two were united in marriage on July 6, 1957. They remained in Kentucky for the duration of their marriage and raised a close-knit family rooted in the Baptist faith. In her free time, Faye loved cooking and baking. In her younger years she frequently made homemade chocolate fudge on Friday nights. Her children remember those nights fondly. She also enjoyed landscaping, gardening and being outdoors. She had a love for the beach and traveled there every chance she got. In warm weather, you would find her out sunbathing, swimming or tending to her roses. In cooler months she enjoyed bowling and participated in a league for over 10 years. She also loved music, especially Elvis, and dancing. Above all else, Faye loved spending time with her family. She was preceded in death by her parents, John Henry Gaither and Mary Lee Hughes Gaither; her brother, William Gaither; and children, Elva Lee Jones and Curtis Andrew Jones. She leaves behind a host of loving family members including her husband of 64 years, Mitchell Jones; her brother, Linwood Henry Gaither; four children, Charlotte (Donald) Creech, Robert Jones, Douglas (Sheila) Jones, Janice (Harold) Mosley; her grandchildren, Tyler Baker, Brittany (Brooks) Cawood, Jason Collins, Travis (Ashley) Collins, Brandon Smith, Zack Jones, Haley Stepp, Kelsey (Charlie) Gabbard, Alicia Mosley, Devon Mosley and Noah Jones. She also leaves behind many great grandchildren. Funeral services for Alice “Faye” Gaither Jones will be held on Tuesday, March 22, 2022 at 2:00 p.m. in the chapel of House-Rawlings Funeral Home with Dennis Gibbs officiating. Burial will follow at the family cemetery in London, Kentucky. The family will receive friends on Tuesday, March 22, 2022 beginning at 12:00 p.m. until the funeral hour also at the funeral home. In lieu of flowers, the family respectfully requests that donations be made to the funeral home to help with funeral expenses. Donations may be made by phone, in person, or through the following link: https://www.paypal.com/donate/?hosted_button_id=5JRLLK2JMNGZG The family has entrusted House-Rawlings Funeral Home with the arrangements.

It is with great sadness that the family of Alice &#8220;Faye&#8221; Gaither Jones announces her passing on Friday, March 18, 2022, at the age of 83. She passed away in the comfort of her home, surrounded by her loving family. Faye was born... View Obituary & Service Information

The family of Alice "Faye" Gaither Jones created this Life Tributes page to make it easy to share your memories.

It is with great sadness that the family of Alice “Faye” Gaither...

Send flowers to the Jones family.