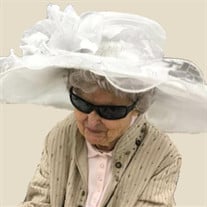 Alice Adams, age 86 of London, KY passed away on Saturday, September 21, 2019 comfortably at her residence. She leaves behind three siblings, Ethel Elza of Westmont, IL, Paul Napier & wife Shirley of East Bernstadt, KY, Judy Hayre & husband Garry of East Bernstadt; sister-in-law, Marion Napier, a host of nephews, nieces, great-nephews, great-nieces and friends to mourn her passing. She was preceded in death by her husband, Donnie G. Adams, her parents, Robert Lee Napier & Della Mae Napier; three siblings, William Franklin Napier, Robert Lee Napier, James Edward Napier, one brother-in-law, Dave Elza. Alice left East Bernstadt, KY via train at the age of 11 to attend the Kentucky School for the Blind in Louisville, KY where she met the love of her life, Don. Don & Alice were married on June 11, 1955 in Indiana and kept home in Louisville for over forty years. She was a participant of the Lighthouse for the Blind, of the Baptist faith and was a member of Cliffton Baptist Church in Louisville, KY. Alice could be described as meek and steadfast. She will be missed tremendously by all but at the same time wonder at the beauty her eyes now behold with her Savior. Funeral services for Alice Adams will be held on Tuesday, September 24, 2019 at 2:00 p.m. in the chapel of House-Rawlings Funeral Home with Pastor Marvin Napier & Travis Robinson officiating. Burial will follow at the Ball - McQueen Cemetery in East Bernstadt, KY. The family will receive friends on Tuesday, September 24, 2019 beginning at 11:00 a.m. until the funeral hour also at the funeral home. The family has entrusted House-Rawlings Funeral Home with the arrangements.

The family of Alice Adams created this Life Tributes page to make it easy to share your memories.